‎The Man Behind the Easel

Stationed paddock-side on the apron level of Arlington Park, one of the world’s extraordinary equine artists and photographers, Thomas Allen Pauly, arranges a temporary “studio” where all can watch this master at work.

A large crowd gathers on this Saturday afternoon, as they do every weekend at this most beautiful of racing facilities, making a perfect backdrop for the artist to make the final touches on his portrait of 2010 Kentucky Derby winner, Super Saver.
Pauly intended to paint in the paddock this day, as he will throughout the summer meet, but inclement weather took issue with his plan. Pauly smiles as he enjoys the parade of people watching him create. They admire his work, some inquire about it, but all are simply mesmerized by his latest masterpiece. After all, few people have had the experience of observing an artist on-the-job, let alone the man who was named in 2006 as the “Official Portrait Artist of the Kentucky Derby.”
Some wonder out loud as they pass the portrait, “Is that the Kentucky Derby winner? “Yes, this is Super Saver He’s almost done, but I still have to put the mud on him,” Pauly told a young boy, who appears to be about 10 years old.

“It was raining that (Derby) day, and he got covered in mud during the race. I add the mud effect last, and with a toothbrush,” Pauly explained, not worried in the least about the ice cream cone the kid’s holding while the child zooms in for a closer look. The youngster exclaims “Wow, you were there?,” and runs off to share this information with his family.
Almost to the count of five, the boy’s family arrives to share the experience when the grandfather inquires, “What’s that black thing you rest your hand on?” The man behind the easel says to him, laughingly, “Good question. It’s actually a curtain rod. It works well as a rest for my hand when I paint. It was white at Churchill Downs, and everyone thought it was a cane, so I covered it with black tape,” he explained.
And that’s the essence of the artist, Thomas Allen Pauly. His first official Kentucky Derby portrait was in1999 of Charismatic, and it remains one of the artist’s favorites. Having spent just a few minutes with him, “charismatic” aptly describes Pauly. He is entirely bemused by the impact his work has on the beholder.
It was a chance introduction to racing that propelled this man to where he is today, he who has taken paint and canvas and re-created moments of thoroughbred racing, from the victories of champions to a still life of jockey’s boots, to perfection.
Invited to the old Sportsman’s Park to watch a harness horse owned by the father of a high school pal, the horse, Rusty Win, did indeed win, with Pauly receiving a winner’s circle photo that ultimately inspired him to draw horses. While his previous artistic endeavors were caricatures created while in high school, the first one of Richard Nixon from MAD magazine, Pauly created a drawing of Rusty Win. He sold it to his friend’s Dad, the horse owner, and his passion grew from there.
This passion has carried Pauly far, quite literally. He travels extensively to attend and photograph racing from Longchamps in France to Meydan in Dubai. He insists on taking photographs himself, so he can translate “his moments” to canvas. “I shoot at the barrel,” Pauly said, “as it gives me the depth that I want to see. People and horses, actually,” he laughed.
The magic of Pauly’s still life portraits move the mind in a different direction. The observer can nearly feel the horses and riders on the track, the emotion of the victories and defeats, furlongs ridden. Pauly has a particular sense for depicting jockeys, and the silks they wear. He gives great care to detail for these masters of the game, and pays close attention to the tiniest details, such as a spot of mud on the glove of Calvin Borel aboard Super Saver.
In all their peacock finery, the majesty of every jockey has a home deep in Pauly’s heart, “especially when the jockey goes up on his horse,” he said. ”I pay close attention to all the detail involved, the hands on the withers, and the connection of horse to rider,” Pauly said, reliving one of many great moments in his mind.
Pauly explained, “Someone asked me how I concentrate at the Kentucky Derby when they play ‘My Old Kentucky Home.’ This year was the first time that I actually stood and listened, because usually I’m down in the trenches shooting photos. I felt the moment, but then I went back to taking shots.”
His studio loft located in Chicago is a shrine to horse racing. Jockey’s silks, photos, saddlery, a whip made especially for him by Rene Douglas, and a caricature done of Pauly by Pierre E. “Peb” Bellocq, the legendary Daily Racing Form artist, adorn the walls.
Pauly also finds solace and inspiration at his 100-acre farm situated on a lake in Hayward, Wis. It is here where he painted the jockeys’ caricature, which was a key element to auction items to aid the Permanently Disabled Jockey’s Fund (PDJF) “Dining with the Dynasty” fundraiser event held at Arlington Park in August 2009.
Twenty-three Hall of Fame jockeys attended and were the subjects of part of Pauly’s work for the event. He created a seven foot canvas called “The Gate” that depicts each Hall of Fame jockey who attended the “Dynasty” event in the starting gate detailed down to eyeglasses and aging. Pauly designed the event invitations, and a collectable program with inserts that featured each jockey’s biography and caricature. In addition, he designed a limited edition collectable poster.
While Pauly began his love affair of horses 32 years ago, the list of accolades and achievements grows. 2010 was the 11th consecutive year that he photographed the Kentucky Derby. Earlier this year, Pauly added to his legacy when a collection of his paintings were seen in the “Undercover Boss” (CBS-TV series) episode featuring Arlington Park. These included his classic titled “Red, White and Blue” positioned alongside the desk where Churchill Downs Inc. COO Bill Carstanjen sits while disclosing his “true colors” at the end of the episode.
In 2011, he will be the “Official Artist of the 2011 Iroquois Steeplechase” in Nashville, Tenn.. Future plans are in place to illustrate a book on international racing with noted racing writer Victor Zast. His portrait of Super Saver is complete, and now graces his website at www.horseartist.com.
Pauly’s work is downright magical, even for a non-racing enthusiast. Recalling the ancient Bedouin proverb “God took a handful of southerly wind, blew on it, and created the horse” is truly something of an equally cosmic nature that seems to guide each Pauly brushstroke.
So it is that the racing world has been gifted with yet another great one, who, like so many of his subjects, makes horse racing’s moments real for eternity.

The Permanently Disabled Jockeys Fund (PDJF) was founded in 2006 as a collaborative effort of horse racing industry leaders. Its mission is to bring much-needed financial assistance to jockeys who have given so much to the sport of horse racing.
PDJF is governed by an independent board comprised of stakeholders from a broad cross-section of the horse racing industry. The organization is committed to working with both industry and medical research groups to improve the safety of both the human and equine athlete as well as medical research projects dedicated to reducing catastrophic injuries.
Among its board members are Roy Arnold, president, Arlington Park; horse owner William Farish; actress and horse advocate, Bo Derek; and jockeys Jon Court and John Velazquez, and others.
Nancy LaSala is executive director of PDJF, and to the contribution of Thomas Allen Pauly to the organization she said, “The PDJF is very grateful to be associated with Tom Pauly and his work. Tom has such a great spirit and interest in horse racing, and in particular, the jockeys. His cumulative work is the best example that illustrates his love of horse racing. His willingness to share his work, invest his time and service to help further the mission of the PDJF is a testament of his commitment.”
Posted by THOMAS ALLEN PAULY www.horseartist.com at 7:22 PM No comments: 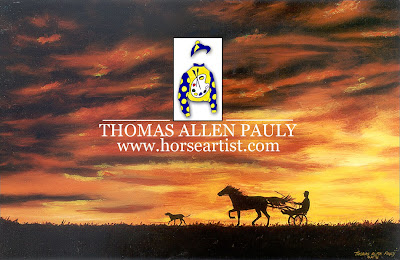 ‎"George Steinbrenner doesn't carry cards"...When I was just beginning my career in equine art, I had an art exhibit at the Illinois Standardbred Yearling Sale at Sportsman's Park. A gentleman approach my gallery and said he wanted to buy my piece titled "Winter Solstice". "I want it delivered ASAP". I asked him for his business card... "George Steinbrenner doesn't carry cards", I preceded to give him a pen and a pad of paper which he wrote his name and address while mumbling something. I always thought that it would have been so much easier for him to carry business cards.

George Steinbrenner passed away yesterday and I will always remember that special moment.

To this day, I always carry cards.

Posted by THOMAS ALLEN PAULY www.horseartist.com at 3:02 PM No comments: