Pauly: "Layer by Layer" in the Blood-Horse Magazine

Blood-Horse magazine senior staff writer Ryan Conley wrote a wonderful story about my career in equine art. It will appear in the May 23, 2009 Preakness issue along with stories about the great filly Rachel Alexandra capturing the 2nd leg of the Triple Crown... This is a great honor since the Blood-Horse traditionally does not write stories about equine artists...
Many thanks to Ryan & the Blood-Horse.

Inside Track: Layer by Layer

Thomas Allen Pauly’s love for painting subjects of Thoroughbred racing was developed somewhat like the intricate portraits he produces from his Chicago-area studio: layer by layer.

Pauly found from an early age that he could translate art from photographs, and the second medium eventually became another passion. As a photographer shooting for such publications as Illinois Racing News, Pauly not only gained access to top horses and jockeys at Triple Crown races and Breeders’ Cup World Championships, but also at such international events as Royal Ascot, the Arc de Triomphe, Hong Kong Cup, and Dubai World Cup, among others.

“My eye as an artist has taught me to be a good photographer,” said Pauly, who turned 49 earlier this year. “And as I go along, doing race pictures are a lot of fun.”

But Pauly’s primary focus is on his paintings -- even more so since retiring in February following a 30-year career as a repairman for AT&T.

“Every day was like a struggle, because it wasn’t what I wanted to do,” he said. “When I would come home after working eight hours, I would go to my studio to paint, sometimes until 2 a.m.”

But his workaday job was not without at least one highlight as it relates to his artistic pursuits. Pauly said he had been trying to sell a portrait of grade I winner Stevie Wonderboy to his owner, entertainment mogul Merv Griffin, when he finally received a call closing the deal.

“I remember I was up in the ceiling running this wire at the (Chicago) Board of Trade,” he said. “It was a god-awful day, everything was going wrong. And then I got this call from Merv Griffin’s office and they ended up buying the painting. It was very surreal to have my head stuck in this drop ceiling and talking to Merv Griffin’s office.”

Pauly has no idea how many pieces of artwork he has produced, but he clearly remembers certain milestone productions. There was the caricature of President Richard Nixon he did in fifth grade that initially sparked his interest in art, a piece modeled after a similar effort of legendary cartoonist Mort Drucker of “MAD Magazine” fame.

Then in 1978, he sold his first piece of artwork – a drawing of a harness racehorse named Rusty Win, who was owned by the father of one of Pauly’s friends. Pauly and others had gone to a race at old Sportsman’s Park, and when Rusty Win posted a victory, the burgeoning artist ended up in the winner’s circle. It was Pauly’s first time at a horse race.

“And when I got an 8-by-10 (photograph), I was so moved by the situation I decided to do a drawing of the horse,” said Pauly, who sold the drawing to his friend’s father.

From there, demand for his efforts only grew. In 1989, he completed a still-existing caricature montage for Arlington Park, which is located on the third floor near the press box. In 1990, he was commissioned to paint 1989 Illinois Horse of Year Western Playboy, and the resulting portrait was given to the owners as a trophy. Since that time, each owner of an Illinois HOY has been awarded a Pauly trophy portrait.

“That one really stands out,” Pauly said.

Another of his favorite portraits is of Charismatic, who won the 1999 Kentucky Derby (gr. I) and Preakness Stakes (gr. I). “It was my first Derby, and he was a great looking horse,” said Pauly, who keeps that portrait in his studio.

The artist works in a 500-square foot loft studio filled with racing silks, saddles, saddle cloths, and bridles. “I have a lot of showings there,” he said. Many of Pauly’s portraits are done in oil, using a layering technique of glaze and paint he said is akin to how the “Old Masters” painted. Examples of his work can be viewed on his Web site at www.horseartist.com.

Pauly was also commissioned by Churchill Downs as the official portrait artist of the 2007 Kentucky Derby, which is best remembered as the crowning victory of the ill-fated Barbaro. Pauly produced the portrait within four or five days after the Derby so that it could be given away on the track’s fan appreciation day, which was held after Barbaro was injured in the Preakness.

“(Churchill officials) were debating on whether to give it away, but he started to get better, so they said let’s do it,” Pauly said of the heavily-publicized rehabilitation effort given Barbaro. “People were lined up the parking lot waiting to get the poster. They were real appreciative.”

Pauly has hooked up with noted turf writer Victor Zast to produce a book about international horse racing. “I’m going to do 36 paintings – places, people, racetracks, and the horses involved with it,” he said.

Posted by THOMAS ALLEN PAULY www.horseartist.com at 10:05 AM No comments: 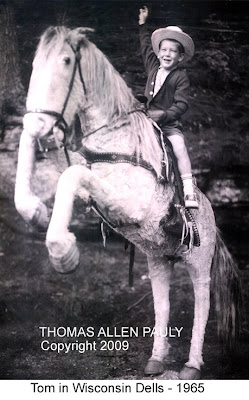 My first real memory of a horse, although it was stuffed was at 5 years old. Our family drove up to the Wisconsin Dells for our summer vacation. My mother, Jean put me up on a great big gray horse and dressed me up like a little cowboy. Boy, I was a happy little kid. But, days later when I found out that it was once a real horse and not a fake, I was devastated.....

My first real memory of a racetrack was years later when driving pass Maywood Park. I asked my dad what that was..."It's a racetrack, only bad people go there". Why would he say that? After my dad passed away, I found out that he was a real small time bookie. He ran book out of his Chicago Tribune newspaper stand on the Northwest side. Ma said he told me that story to keep me from ever going there. It didn't work. Nothing would.


"This race isn't over, please hold all tickets"

Posted by THOMAS ALLEN PAULY www.horseartist.com at 6:11 PM No comments:

This is my first time blogging... I am in the process of designing my new website www.horseartist.com and I thought that a blog would be a welcome addition.

I am an equine artist who has been painting the beauty and excitement of international horse racing since 1978. My earliest memory of anything artistic was in the 5th grade. A classmate named Paul Cronin brought a Mad Magazine to Palmer School and passed it around in class. When it finally came to me, what I saw would change my life forever. There was a caricature of Richard Nixon drawn by Mort Drucker. It was such a funny illustration, I was drawn to it. I never had any de 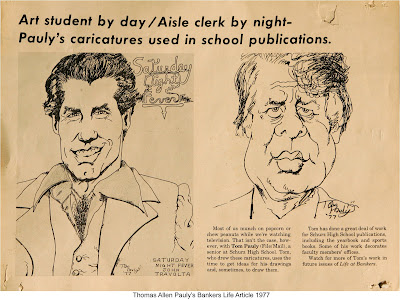 sire to draw before that moment but I took out my #2 pencil and proceeded to copy it. It must have turned out pretty good because I kept asking him to bring more & more Mad Mags(boy, I wish I still had that drawing). I started buying my own magazines at resale shops and actually developed a huge collection. Some of them are from the 50's. Mort Drucker was a huge influence in my career (in fact, the 3 dots at the end of my name is how he signed his). It was his drawings at Mad that taught me me how to draw caricatures, which 18 years later would prove to be very beneficial when Arlington Park Racetrack came calling.

My life at the track began on June 17, 1978. My friend, David Gonzales was having a party at his house when he announced that his dad's harness horse "Rusty Win" was in S 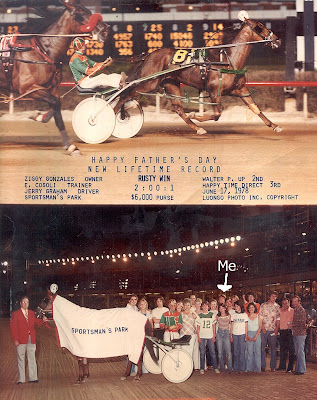 portman's Park's 8th race. About 20 of us jumped in our cars and made it by minutes before the race was off. The horse won by 5 lengths and all of us crammed into the small winner's circle. I was hooked.
I couldn't get enough of the track so I started calling in sick at Bankers, Life and Casualty. Eventually, I got fired. Here I was, 18 years old just out of high school. No job, no money and no aspirations. But, I sure loved the ponies.

A couple months later... I was sitting on my mother's front porch wondering what I was going to do with my life. Then Mrs. Pritzer walks by. She tells me to get off my butt and apply at AT&T. I did, passed the test with flying colors (just out of school, couldn't do that now) and promptly turned down their offer. It was for a night shift position, which of course would interfere with me going to the track. They eventually offered me a day job. I accepted and in February of this year after 30 years with the same company I retired. But, throughout those 30 years, it was a difficult struggle between my corporate job and my passion for painting horses.

My first drawing of a horse was of "Rusty Win". I used the win picture as reference and I rendered it in color-pencils. It was pretty awful, but Dave's dad bought it anyway. That was the start of my wonderful equine art career.

Posted by THOMAS ALLEN PAULY www.horseartist.com at 7:17 PM No comments: